Held at the Mounties Club in Sydney, Australia, youngsters from both the host nation and NZ competed in the event. After the initial Round Robin groups, the Quarter-Finals onwards were Knock-Out.

Hildred qualified top of his group with three wins out of four. In the QFs he eliminated Denzel Nicholson (Aus) 4-1 and then in the Last 4 he squeezed past Marc Fridman (Aus) 5-4.

His opponent in the final was Lilley, who himself finished top of his pool with three out of four victories before defeating Hilton Moeahu (Aus) 4-0 and Alex Pace (Aus) 5-1 in the Quarters and Semis respectively.

The top two qualifying seeds played out a very entertaining final which would go the distance. In a best-of-11 match that saw Lilley register an 89 break and Hildred an 84, Hildred went 5-2 up, only to see his rival win three in a row to force a decider.

However, in a re-racked eleventh frame, Hildred managed to get over the line and claim the Continental gold. It is a sweet victory for Hildred having lost in the final to Australian Cale Barrett last year.

The following day there was the annual Trans-Tasman Under 21 Test Match which saw New Zealand - captained by Lilley, dispatch Australia 9-1.

Eslewhere in Oceania, in two all-Australian finals, Carlie Tait got the better of Megan Fullerton 4-2 to become continental Women's Snooker Champion for the first time, whilst Joe Minici overcame Jason Colebrook 966-515 for another Billiards Championship.

The Women also had a Trans-Tasman Test Match which saw New Zealand win 6-4.

The Oceania Championship takes place at the same venue between the 14th-17th March.

The image above is courtesy of the Massé Facebook page 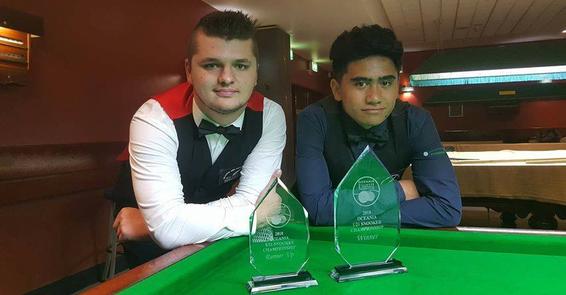