Money matches – both in terms of pot size and magnitude, don't get much bigger than this.

Tom Cousins and Mark Boyle, two of English 8 Ball Pool's hottest global properties, will cross cues this Saturday in a Race to 31 for a minimum £50,000 winner-takes-all pot.

Currently the money match scene is very affluent with big money being played for virtually every week. However, it is very rare for two of the sport's most successful tournament players to go head-to-head such as this.

Ever since this fixture was agreed a few months ago, there has been anticipation and excitement in the air. Top English Pool commentator Nick Phinn (who will be calling the game this weekend) has described it as 'The Match of the Decade'. Certainly not a statement he uses lightly -

​"The game of Pool has been gathering momentum in recent years and has reached a new zenith with an incredible future. That is epitomised in the match on Saturday.

Two players from distinct rule sets unified in a money match that can only be billed as the game of the decade.

Player profiles do not come much bigger; a two times World Champion on a rich vein of form meets arguably the most prolific money match player of recent times who took the IPA by storm last year.

Games of this nature and magnitude are rare and I am thrilled and privileged to be a part of the Beard Productions team in covering it. Clear your diaries, stock the fridge and don’t miss a minute of the action!".

Both players come off the back of very successful seasons on either side of the sport's structured, competitive divide, boosting their already ultra-impressive CVs.

Two-time WEPF World Champion Cousins created history when he claimed the opening three UK Tour events consecutively - a hat-trick feat that has never been achieved before in any era. As a consequence he sits pretty on top of the UK Pool Tour rankings.

The Welshman also reached the Semi-Finals of this year's WEPF World Championship in Blackpool before going down to eventual winner Mick Hill.

Former Professional Snooker Player Scotsman Boyle has taken the IPA circuit by storm this campaign. In his first full season on the tour he had to start via the opening amateur qualifying rounds for each Open event. Yet that didn't stop him sensationally chalking up back-to-back Welsh and English Open victories at the start.

During his stay in Bradford he did the double when scooping the English Amateur title on the same weekend, an achievement he nearly completed in Cardiff  when he was the Runner-Up in the Welsh Amateur. Away from the IPA Tour he also won the keenly contested EBA UK Open.

In regards to this weekend's encounter Boyle said -

"I'm really looking forward to the match as it brings both pool communities together. It will be a really tough challenge playing in Tom's home venue, but I love a challenge".

The outcome of the match has certainly split opinion amongst the Pool community. A poll on Facebook seemed to suggest that more people think Boyle will register an away victory - but it's a fairly close call.

There is a real sense of two 'Worlds' colliding here whether it be Wales v Scotland, UK Tour v IPA Tour or even World Rules v Blackball Rules.

Either way, big credit must go to both parties for putting their money where their mouths are and arranging a match we all want to see.

Action this Saturday Afternoon will be live streamed exclusively by Beard Productions. Please visit their Facebook page here for details on how to tune in.

Image above is courtesy of Beard Productions.

Written and published by Michael Day on the 29th November 2017 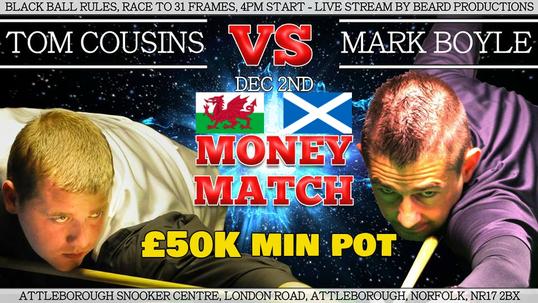