A few weeks ago, we listed players who had won a Cuesports World Championship in 2017.

On that list was the Republic of Ireland's Fred Dinsmore, who completed a hat-trick of World Wheelchair 9-Ball titles in Tampere, Finland during the Autumn. This followed up his previous victories in Belgium (2000) and Brazil (2005).

As well as numerous other major accomplishments on the American Pool scene – such as being a five-time European Champion, Dinsmore is also very proficient in other Cuesports disciplines and has claimed World Championships in both Snooker and Blackball in his illustrious career too.

Fred kindly took some time out of his busy schedule to talk with us at The Cue View...


Hello Fred, thank you for chatting to us! Congratulations on winning yet another World Championship last year. Tell us a bit about how the tournament went and how you feel adding another World Title.

Preparation for the World Championship was difficult because I had been ill since the Nation-Continental Cup which was held in September. I wasn't even sure if I could play in it.

As the event progressed, though, I knew I was playing well. It definitely felt pretty good to win, even more so with the difficult draw I had.


You mentioned the inaugural Nation-Continental Cup (UK v Europe) there, which is like a Wheelchair version of the Mosconi Cup. You were part of the victorious Team Europe side; that must have been a fun event to be part of?

It was a brilliant event and we had a great team. It was also nice to the win the MVP award (for most individual points gained).

Hopefully it continues and with Darren Appleton's help it will grow.

I think Team Europe will be tough to beat for the foreseeable future.


Do you have any Cuesports and / or sporting heroes?

I have a few. Michael Schumacher would be my sporting hero but in Cuesports it is Darren Appleton, Niels Feijen, Ralf Souquet and Stephen Hendry.


How did you get into Cuesports?

I used to play Basketball (although very badly) and a friend said he was playing in a snooker event.

I went to it, won it, and the rest is history as they say...


We now associate you mainly with the blue felt of an American Pool table, but I understand you have won World Championships in other disciplines too?

I don't tend to play other Cuesports that often, but I am the current World Wheelchair Blackball Champion. On the same day of winning that, me and my playing partner Tony Southern (England) claimed gold in the Doubles event too.

Those Championships were held in Killarney, Ireland, so I also went to promote my business www.freddinsmorebilliards.com

I have also played Snooker – I was a World Champion in that too, although that was a long, long time ago.

I believe I'm the only player in any division to be a World Champion in three totally different Cuesports.


What obstacles have you overcome in order to compete and what do you think could be done better for disabled players in terms of playing and getting involved? Do you believe that things like equipment/rules could be changed to make it more accessible?

Funding is a major problem, so more prize money would be great.

I wouldn't want to see any modifications to the table etc – we should be playing on the same equipment.


What are your plans and ambitions for 2018 in the Cuesports World?

At the moment I am not sure. I don’t really know what events I can play in, but if I can secure funding I would like to win another European Title.

I would also hope to defend both the Nation-Continental Cup and World Championship, but that might be too much to expect.

I definitely need a financial sponsor in order for me to continue travelling and competing in these tournaments.

If anybody can help, please contact me - I come a lot cheaper than you might expect for a multiple World and European Champion!


We want to thank Fred for his thoughts and we wish him luck for the future.

As mentioned, if you want to help Fred achieve his goals for the upcoming campaign, please get in touch with him via his website of www.freddinsmorebilliards.com

Written and published by Michael Day on the 24th January 2018 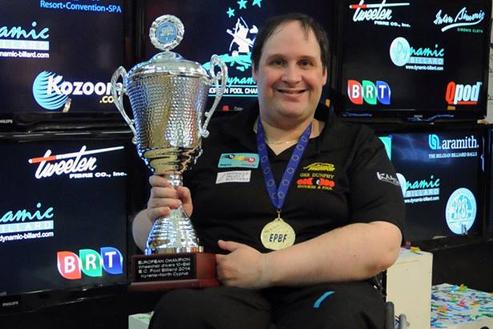