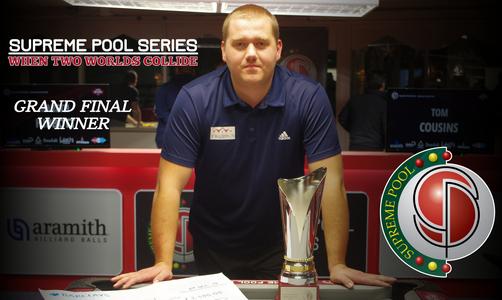 In what was the fifth and culminating event of the campaign, a plethora of the world’s top English 8-Ball Pool talents once again gathered near Stoke-on-Trent for a slice of the £25,000 plus prize money and one of the sport’s most sought after accolades.

Having been such a focal point over the last decade, you could argue Cousins’ results on this circuit had been a tad underwhelming; he hadn’t reached a final of any of the previous nine Supreme Pool Series tournaments throughout the last two years. However, ‘Top Cat’ was back to his glorious best in this pre-Christmas extravaganza.

The 2013 and 2014 WEPF king of the world made his intentions clear in the double elimination phase, sweeping aside John Cairns Snr 11-2, Mark Astbury 11-3, and then the Central Vehicle Leasing Challenge event four champion Clint I’Anson 11-4, to qualify for the last 16 knockouts with the loss of just nine frames. ​

​​There would be a different path of success for Cousins during the second half of the competition, though, as he showed his ice-cool temperament to dispatch a quartet of former world champions; three of those consecutively via a deciding frame.

In a blockbuster last 16 clash, pre-tournament joint favourite and two-time SPS event winner Phil Harrison came back from 10-6 down to force a final frame shootout, only to watch Cousins break and dish to go through. The Welshman held his nerve again against event three Strachan Cup victor and local star Adam Davis, where he trailed 6-4, then led 9-6 before emerging in a twenty-first frame. This set up a tasty semi-final with travel and practice partner Shaun Chipperfield where there were never more than two frames between them. 2016 WEPF World Champion Chipperfield had a chance in the decider, but after not getting desired position on his penultimate red, Cousins gleefully seized the opportunity to book a place in the final.

​The Welshman’s opponent in the championship showdown was another Supreme Pool Series maiden finalist in 2016 IPA World Champion Gareth Hibbott. Qualifying through the losers side after a narrow 11-10 loss to Australia’s Jake McCartney in the winners qualification round, smooth operator Hibbott ended the hopes of Jimmy Croxton (11-9, last 16), Jack Whelan (11-8, quarter-finals) and David McNamara (11-10, semi-finals) in the knockouts.

It was Cousins who made a strong start to the final, though, opening a 4-0 advantage that he later extended to 8-2. Hibbott refused to quit, chalking up four frames in a row to reduce the deficit to 8-6, but Cousins stopped the run, composing himself to eventually secure an 11-7 glory. Along with the title of the 2019 Supreme Pool Series Grand Final Champion and the trophy, Cousins also pocketed a handsome £7,000 top prize.

Elsewhere in the tournament, the last 16 line-up was arguably one of the most exciting the Supreme Pool Series had seen. Fresh from a huge money match victory the previous week, Mark Boyle reached the quarters before elimination to Chipperfield, while McCartney and Malta’s Johann Attard represented the overseas contingent well by recorded pleasing results to qualify.

Coming into the event as the number one seed, Karl Boyes lost in losers round 4, number two seed I'Anson missed out in the losers qualification round to Whelan, and number three seed Declan Brennan perished in losers round 3 to Boyes. Last year’s Grand Final winner Liam Dunster began well but then lost to Greg Batten and McNamara – to the latter in a deciding frame. Chris Melling also failed to make Sunday progression after an 8-0 loss to Boyle in losers round 4.

The 2019 Grand Final brings down a curtain on the Supreme Pool Series with another edition not being held next year. The trailblazing series brought together world champions and major international title winners from both sides of the rules divide to compete under one roof for record-breaking money in front of a live global online audience via YouTube and social media platforms.

You can watch action from the 2019 Supreme Pool Series Grand Final - and other SPS events - via the Beard Productions YouTube channel.