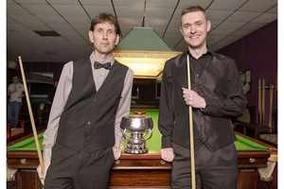 Neil Whalley came away with the 2015 Faast Fit Snooker Classic during the weekend of 18th& 19th of April.

Whalley was in blistering form throughout, winning all 4 round robin games 2-0, then whitewashing Deane Campbell 3-0 in the last 16 and Dave Marshall 3-0 in the quarter-finals.

He dropped his first frame in beating Brent Jones 3-1 in the semis, and had the same margin of victory over Jason Todd in the final.

Mark Canovan made an 84 break which would prove to be the weekends highest effort.

33 year old Adam Shorto of Guernsey won his second Channel Islands Snooker Championship with victory at the North Legion on his home island for the first time.

In the traditional annual Island Champion v Island Champion clash, he beat his Jersey counterpart David Brabiner 5-4 in an epic match - stark contrast to both of this years Island finals.

Shorto, who first won the CI Snooker title back in 2006, fashioned a 48 break to take the opening frame.

He also had footholds in the next three with further runs of 41, 39 and 54 in the respective individual frames, but managed to lose all of them to Brabiner on the colours making it 3-1 to the Jersey man at the interval.

After the break however, Shorto came back rejuvenated and determined. He played consistent matchplay snooker to reel off frames 5, 6 and 7, retaking the lead and moving him to within one of the winning post.

The experienced Brabiner would fight back though in the eighth to level it at 4-4 and take it into a decider.

Shorto started off with a 33 break, but in missing a black he would block Brabiner from an easy opener.

In attempting to pot a tricky red, Brabiner failed, allowing Shorto an immediate return to the table. It was an opportunity he took, carving out a 52 break to wrap up the match and championship, much to the delight of his local support.

In what was a fairly disappointing affair in terms of break building, Brabiner took the opening frame with the aid of a 51; this ended up being the highest break of the best of 7 match.

Brabiner would double that advantage before Canavan made a 30 break to impressively take the 3rd frame.

However, David exhibited fantastic shot making to regain his cushion by winning frame 4, and with small runs of 35 and 20 he sealed the deal to come through a 4-1 victor.

It’s the second time the multi-discipline cueist has won the Island Snooker Trophy. He won his first title 24 years ago in 1991 as a teenager!

Ian Sargeant, once of professional status, was a popular winner of the 2015 ‘Squire Cars’ Welsh Masters Snooker Championship - an event for those over the age of 40.

Sargeant was actually a competitor on the highest tier of snooker for 10 seasons, with his best run being a last 32 finish at the 1996 German Open.

At the Redz Snooker Club in Cwmbran, he defeated Elfed Evans 3-2 on the final black in an absolute thriller of a match, which saw the victor sinking the last ball from its spot into a middle pocket to secure the glory. It would have been a great relief after also seeing his 2-0 lead extinguished by the battling qualities of Evans.

In the semi-finals Sargeant comfortably dispatched Darren Morgan 3-0. Morgan had earlier in the event made a 142 break; this years highest.

Sargeant now has the opportunity to play in the IBSF World Masters later on in the year in Africa.

Also on the Welsh scene, Tom Rees and Jordan Steins won the Welsh Pairs Championship with a 3-0 victory over the young pairing of Jackson Page and Tyler Rees - also held at the Redz Club.

Rees / Steins had beaten Gerald Brain and Andrew Tugwell in the semi-finals, whilst Page / Rees saw off Ryan Rowlands and Sam Thomas..

The highest break was an effort of 92 from Bob Watkins.

Former professional Wallace, who once reached the quarter-finals at the Crucible in 2001, raced into a 8-1 first session lead to completely strangle the final away from his Antrim opponent.

The 45 year old from Dungannon closed out proceedings with an 85 break, the highest of the match, in the 12th frame.

It was the fourth year in succession he has taken the prize. 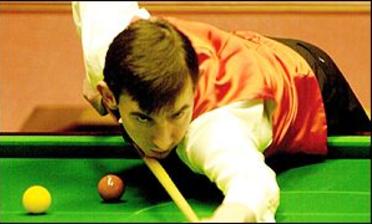