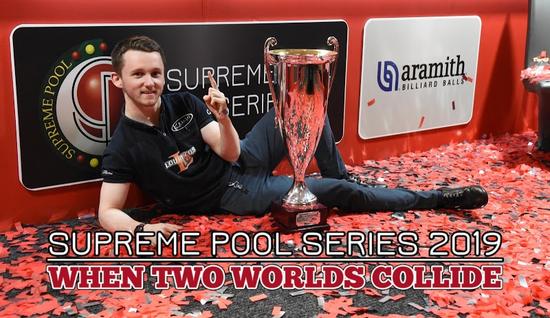 After last year's unparalleled success, the groundbreaking Supreme Pool Series will make its eagerly awaited return for a second installment in 2019. The big money, five-event concept will once again bring together top exponents of the English 8-Ball Pool world all under one roof at the renowned Players Pool and Snooker Lounge near Stoke-on-Trent.

Mirroring the inaugural edition, the season opens in Spring and leads up to a Grand Final event towards the end of the year. After listening to constructive feedback from the players, though, tweaks have been made to the programme elsewhere.

The 2018 calendar featured a share of both World Rules and Blackball events – representative of the unique cross-code palette of entries that was on display. However, due to the popularity of the new Supreme Rules that were showcased in the final event, a decision was made to adopt them throughout the whole of the upcoming campaign.

Another mission objective of the series was to reward the players with improved prize money; this was exhibited when Liam Dunster walked off with a record £51,000 winners' cheque at the end of the year - the largest amount ever awarded in the sport’s tournament history. Whilst lucrative sums are still available to the champions of each event this time around, total prize money has been spread out further down in 2019 with around the top third in each tournament guaranteed to cash.

The Supreme Pool Series has received global acclaim with viewers from both sides of the world tuning into the online Beard Productions live stream coverage. Overseas demand for the series cannot be understated, so much so, that an exciting additional event has been agreed for the start of October – the four-day Morocco Masters that is scheduled to take place in Tangier.

A plethora of former world champions from different rulesets adds to the embarrassment of riches on display including Phil Harrison - back-to-back winner on the circuit in 2018 - and the ultra-consistent Dunster, who finished the series as the number one ranked player. Countless other major title winners, professionals and internationals will feature too.

Chris Melling and Karl Boyes – multi-time Mosconi Cup champions in the past and former world champions in various disciplines themselves - will both also return to their smaller table roots.

A trademark of the Supreme Pool Series is international participation. Typically strong representation from the UK will be challenged by a cosmopolitan contingent of hopefuls coming from Ireland, Malta, Morroco and even as far afield as Australia.

Event 1 – The Liberty Games Open – takes place next week between the 5th-7th April.

For further information on the series, please visit the official website www.playerspoolevents.com

Written and published by Michael Day on the 29th March 2019