Murphys Sports Bar in Doncaster is preparing to host the lucrative 2019 Taom 8-Ball Pool Series, a five-event concept that is set to feature several of Blackball Pool's biggest names.

​Following the popular English Open that was held at the Yorkshire venue earlier in the year, the organisers decided to build on their success and bolster their tournament portfolio. Along with the backing of Taom Billiards - currently one of the cuesports industry's most renowned brands, the series boasts a hefty £60,000 prize fund, with scope for that to rise should further sponsorships be obtained.

​The opening leg is due to take place in the new year with the International Open being staged between 11th-13th January. As with each stop, the winner will be guaranteed a minimum £5,000 payday.

Players will also accrue ranking points for their performances throughout the year, with efforts culminating in a season-ending Grand Finals at the beginning of November. In an innovative approach, the player ranked number 1 at the end of the campaign will also scoop an additional £5,000 bonus, meaning there is likely to be a sub-plot for that finale, especially with double ranking points up for grabs.

​High-profile stars have already signed up for the series including Ben Davies, Scott Gillespie and Mick Hill - all three of the sport's current World Champions, as too has Craig Marsh, the 2017 IPA World Champion.

Last September's English Open finalists, Mark Boyle and Liam Dunster, have had stellar 2018s on the small table with multiple major titles from various circuits going their way. They too will be hoping that participation in this brings them further riches during 2019.

BCA Hall of Fame inductee Darren Appleton will continue his re-birth within the sport on the series, whilst fellow Mosconi Cup winning teammate Chris Melling is also scheduled to feature at certain points.

Elite 8 Ball TV will bring you live stream coverage throughout the series with a dedicated arena table in action for the early and latter stages of each event.

To learn more about the series, please visit the Murphys Doncaster Pool Events group on Facebook. 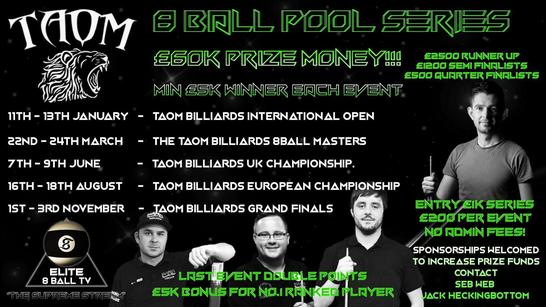