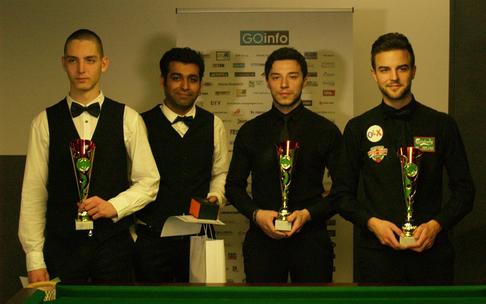 Players from Croatia and Bosnia & Herzegovina competed in the inaugural Zagreb Snooker Open which was won by the host nation's Tin Venos.

Alongside the 500 Euros first prize, the tournament was well supported by a number of businesses who gave prizes to the successful players. It was held at The Nugget Snooker Club the weekend just before Christmas.

The competition featured a Double Elimination format up until the Quarter-Finals. Venos qualified undefeated and then eliminated Filip Bermanec (Cro) 3-1, Jan Jelenić (Cro) 3-0 and Faris Vučkić (Bos & Her) 3-0 in the Quarters, Semis and Final respectively. On the Saturday he constructed a break of 82, which I believe was the highest of the event.

Venos is also the current Croatian National Snooker Champion. He has played in the last three EBSA European Amateur Championships.

The picture above is courtesy of the The Nugget Snooker Club Facebook page.

Written and published by Michael Day on the 26th December 2017​​​