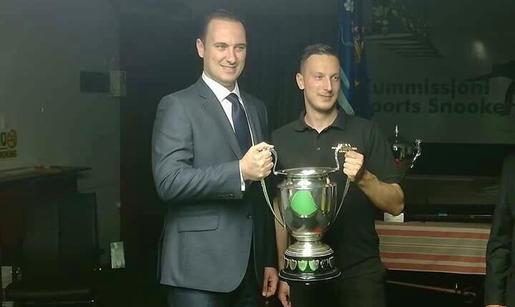 THE AMATEUR ANGLE - CINI IS CHAMPION OF MALTA AGAIN

The championship featured the top 20 players from the country who were split into four Round Robin groups of five. The top two from each then qualified into another Round Robin phase, this time consisting of two groups of four. The top two of those progressed to the Knock-Out stages.

Facing each player twice during the Round Robins, Cini didn't drop a single frame in the opening phase and then only lost one match in the second phase. In the Semi-Finals he defeated recently relegated and experienced professional Alex Borg 5-2 with breaks of 63 and 83.

His opponent in the final was Aaron Busuttil, who had eliminated Frans Mintoff 5-1 in the other Last 4 fixture. After four exciting hours at the Msida Band Club venue, Cini managed to squeeze through a 6-5 winner. He was aided by runs of 75 and 64.

Cini, who reached the Last 32 of the World Snooker Federation Championship on his homeland a few weeks ago, first won this title two years ago when he saw off Borg in the final.

The picture above is of Cini being handed the trophy by Dr. Clifton Grima, Malta's Parliamentary Secretary for Sports.

Written and published by Michael Day on the 30th April 2018