​​​​​THE AMATEUR ANGLE - SUPER SIX FOR PETROV IN ESTONIA

​​Andres Petrov retained the Estonian National Snooker Championship in the capital city of Tallinn last weekend. It was the sixth time in a row that the 22-year-old had claimed his country's premier snooker competition.

The event was initially held at two different venues - Club 147 Snooker and the Hill Hill Billiard Club. Qualification was held with eight spots available to join the top 7 from the Estonian Snooker Premier League ranking list and the 2017 champion, Petrov, in the last 16.

​Petrov didn't lose a frame whilst defeating Tanel Kuusik (3-0) and former two-time winner Rafig Adigazalov (4-0) in round one and the quarter-finals respectively. In a repeat of last year's final, the defending champion then eliminated Alexander Leitmäe, 5-2, in the semis, having trailed 2-0.

His opponent in the final was Denis Grabe, a renowned American Pool player who is currently ranked 24th in the world. He secured his berth in the final after a rapid 48 minutes 5-0 victory over youngster Denis Sokolov in the last 4.

In an intriguing final that was televised by Delfi TV (one of the biggest media companies in the Baltics), Petrov registered breaks of 125 (the tournament's highest), 69 and 64 during a 6-3 win.

​Petrov is one of Eastern Europe's promising talents. In 2017 at the EBSA European Amateur Snooker Championships in Cyprus he reached the semi-finals of the Under 21s event, and then followed that up by getting to the final of the Men's Championship where he lost to Chris Totten.

He has also previously taken part on the European Tour, Q-School and was awarded a World Professional Championship qualifying wildcard in 2017.

Many thanks to the Estonian Snooker Federation and Andres Petrov who assisted in compiling this article. 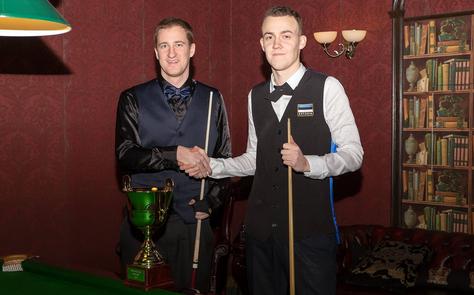