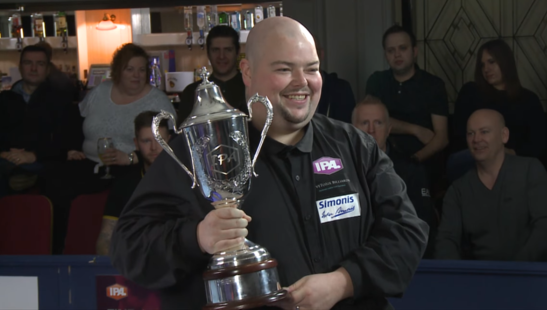 Earlier this month Craig Marsh won the most prestigious title on the IPA circuit when he claimed the 2017 World Professional Blackball Championship in Bradford. Twelve months previously - in the same event and venue, he suffered heartbreak when being ousted in a deciding frame during the final.

With the new tour season about to begin this weekend in his home country of Wales, we had a quick catch up with Craig about his thoughts on becoming the World Champ, and hopes for the future...

​TCV - Many congratulations once again on becoming the 2017 IPA World Professional Blackball Champion; you've had a few weeks to recover and reflect on it. How do you feel now?

CM - Honestly, I've never played so little pool in my life after winning it!

I've been crazy busy with new sponsors, family and friends, people wanting exhibitions plus people coming up to me on the street wanting pictures etc... it's been crazy and I'm loving every minute of it!

TCV - I think one of your strengths over the championship was your mental stability and temperament. I believe in your First Round, Second Round and Quarter-Finals you were 2-1 down in races to 3 (Sets). You also lost the opening set to Simon (Fitzsimmons) in the final. Is that an area of your game you have worked on?

CM - Yes. I worked very hard on my temperament, as it was what used to let me down a lot.

I now use a few concentration techniques that a few snooker players use and have told me about. They seem to be working.

TCV - Did last year's deciding frame final defeat to Gareth Hibbott hurt you being so close to the trophy? Did it inspire you this time around?

CM - It definitely hurt me, but it also prepared me for this year as I wasn't nervous at all this time round. I was sure I was going to pot every ball I went for!

TCV - Obviously you played a little bit on the new Simonis cloths during the inaugural IPA World Series last year. Are you a fan? How do you find them?

CM - I absolutely love the cloth and I took to it very easy.

It does make the game a bit of a leveller as it plays so easy, but I also think it looks amazing and every table you play on plays exactly the same. The consistency of them is the best part for me.

TCV - I understand your win puts you to the top of the professional rankings - that must be another achievement you are very happy with! What are your goals for the upcoming season? You must be looking forward to this weekend with it being your home event in Wales?

CM - My goals are to end the season as Number 1 going into next year's World Championships.

It's all well and good being No 1. now, but you need to keep the level of play up to make it worth while and long term.

It's amazing having an event in Cardiff, especially as there are so many professionals and amateurs a like now playing on the tour, it is very nice to have an event so close to home. Going there as the World Champion will be an amazing feeling!

TCV - The championships were deemed a success and another move in the right direction for Blackball Pool. What future do you think Blackball / the IPA Tour has? Where do you think it could be in, say, 10 years time?

CM - I think the work Kevin Barton, his team and all the professionals have done in the last 5/6 years is incredible.

A lot of people won't know how close we were to not having a tour, and now we are the best tour in the country with all the potential in the world. So in 10 years time I see it being twice as big with an even better standard...if that's possible.

​Craig still has some space left for badge sponsorship throughout the season. If you would like the opportunity to sponsor the reigning World Champion, please contact Craig via his Facebook page.

Written and published by Michael Day on the 23rd February 2017