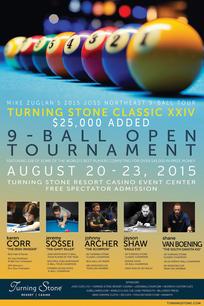 Jayson Shaw made it a successive hat trick of wins at the Turning Stone Classic XXIV.

The Scotsman went through the whole event unbeaten, defeating players such as Erik Hjorleifson, Scott Frost and Justin Hall in the earlier rounds.

In the ‘hot seat’ match he come up against the thoroughly in form Shane Van Boening who was fresh from retaining his World Pool Masters crown in England.

But reigning champion Shaw would push SVB to the losers side in a 9-8 victory.

This meant Van Boening would face his upcoming Team USA World Cup of Pool doubles partner Mike Dechaine in the B side final.

Another small surprise was sprung, with Dechaine keeping his tournament hopes alive in a 9-5 win.

Dechaine had reached the championship tie the hard way after an A side first round loss to Luc Salvas. He then incredibly won 12 consecutive matches including notable wins over Mika Immonen, Dennis Orcollo, Corey Duell and Hall.

However, despite the American keeping it close for most of the game, Shaw managed to pull away in the latter stages of the final, coming through a 13-10 victor.

Written by Michael Day, published on the 3rd August 2015