Former world champion Phil Harrison became the third player to qualify for the last eight of the Vinny.co.uk Champions League Pool on Monday evening at the Players Pool and Snooker Lounge in Newcastle-under-Lyme.

The opening match of the evening on Freesports TV saw youngster Bircher come back from two frames down to claim a 2-2 draw with former International Masters champion Chilton.

That scoreline was also the result of the following match between Harrison and Shepherd. It seemed as if young Welsh international Shepherd was on course to pick up maximum points at 2-1 up with little time left, but a foul gave his opponent a final chance to salvage something in an exciting climax. Harrison duly did, clearing up six reds and the black inside 55 seconds for a point. Shepherd stayed on the table next but went down 4-1 to Chilton.

Having looked a bit uneasy with the 20-second shotclock during his opening encounter, three-time world masters winner Harrison was back to his silky best in his match with Bircher, recording a 4-1 win that saw him clear up twice directly from his opponent’s initial break shot.

That result meant that both youngsters in the group could no longer qualify, but it was Bircher who finished his night on a positive with a 3-2 victory, despite having trailed twice in the tie.

The final match of the evening was a winner-takes-all showdown between two of the sport’s stalwarts. Harrison got off to the perfect start with a break and clearance, but botched a positional shot on his last colour in the second frame when trying to capitalise from Chilton’s in-off on the break. Chilton made the most of his reprieve and finished to draw level at 1-1.

Harrison edged back in front at 2-1 before the match’s turning point came in frame four. On course to break and clear, Chilton missed when trying to force an angle despite the cueball being against a side cushion. He was punished by Harrison who extended his lead and then produced his second break and clearance of the match in the fifth frame to seal a 4-1 triumph; finishing top of the group and securing qualification for phase two.

He joins previous group winners Josh Kane and Aaron Davies in the last eight in February. 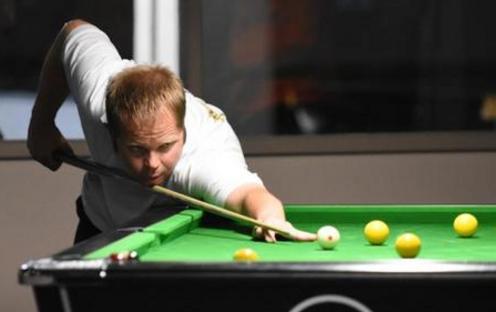