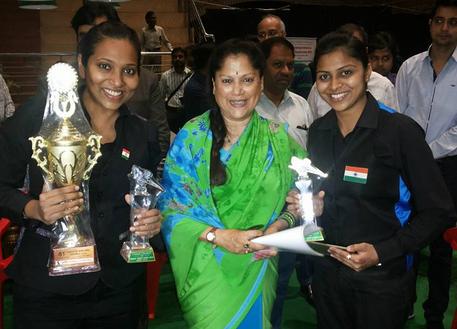 Pillai sailed through her round robin group without losing a frame (won all three matches 2-0), and then won her opening two knockout matches with the same feat.

She did however have to come back from being 2-0 down to Varsha Sanjeev in the Semi-Finals - recovering with a 3-2 win.

Kamani was even more impressive with her route to the championship tie....not dropping a single frame throughout both phases.

In a predictably tight final affair, the pair were locked at 2-2 before Pillai broke away with a 4-2 success.

It was revenge for Pillai over Kamani, who took this title away from her in the final last year, and had beaten her at the same stage in the National 6 Reds earlier this month.

(pictured above is Pillai (left) and Kamani (right) with the Indian minister for sports. Many thanks for the use of the photo!)

The maiden staging of this event once again proves how popular snooker is becoming in Continental and Eastern Europe.

Tracevic's victory also earns her a spot in the EBSA European Women's Championship in a few months time. These are due to also take place in Lithuania (Vilnius).

Hanna Schneider became the queen of Austrian snooker for the very first time this past weekend.

​Played to a round robin format, she narrowly edged out Jutta Braidt on frame difference for the national title.

Written and published by Michael Day on the 2nd February 2016